Sri Lanka’s Judiciary is a legal system which is a combination of English common law, Roman-Dutch civil law and Customary Law. Statutes enacted by Parliament form the primary source of law. Judicial precedents, statutes enacted by Provincial Councils and customs and usage also constitute the law of the land. The judicial system is defined in the Constitution, as an independent institution which provides the traditional framework of checks and balances.


The Judiciary is a Vertical Courts System; the Supreme Court is the highest and final court of law. The Appellate Courts comprise of the Supreme Court, the Court of Appeal and the High Court. The Courts of First Instances are the High Court, the Commercial High Court, the District Court and the Magistrates’ Court. Within this system are incorporated specific courts to deal with Islamic Law, Labour Tribunals, Courts Martial, and other Tribunals which perform functions of a quasi-judicial nature, which are, however, capable of revision by the Superior Courts.


There are other Administrative Tribunals and Special Courts, such as the Rent Boards, Ceiling on Housing Property Board, Land Acquisition Board, Quazis and Boards of Quazis, Agricultural and Labour Tribunals, Courts Martial and Islamic Courts (which have been established for the followers of Islam to conduct their judicial activity according to their customs), which perform functions of a quasi-judicial nature. The decisions of these bodies are capable of revision by the Appellate Courts by way of writs or appeals, as provided by the various enactments by which they had been established. 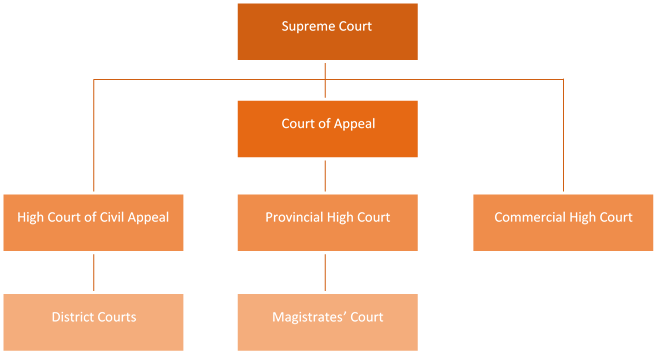