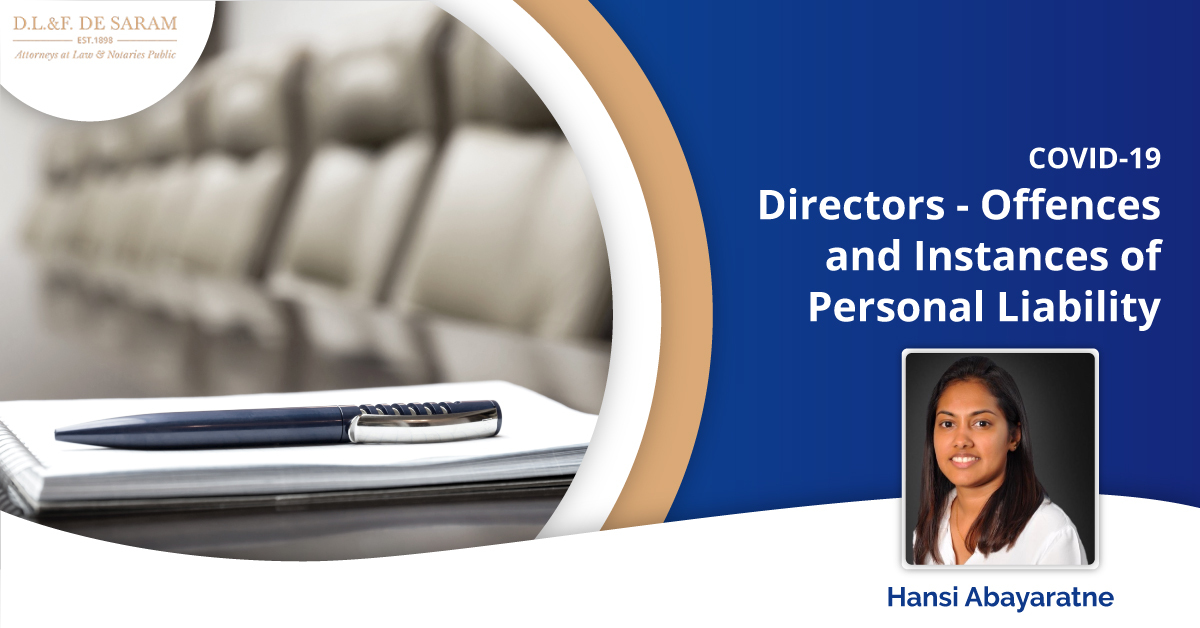 The impact of Covid-19 is likely to cause operational and liquidity difficulties for companies. Aggressive decisions are required to ensure companies are able to navigate through the crisis but directors are placed in a delicate situation under Sri Lankan law, owing to instances of personal liability. Directors must be mindful of their exposure, particularly in relation to statutory dues, insolvency and duties imposed under the laws relating to companies. Directors are often nominated to their office by shareholders and may be expected to act in the interest of the nominating shareholder. But a director must be aware of the company’s obligations to its employees, suppliers, etc., particularly in this ongoing crisis, and act accordingly.

In this context we set out below a summary of several provisions of Sri Lankan law in terms of which directors can be held personally liable. This is not an exhaustive list of duties and obligations resulting in personal liability.

A director is personally liable for any loss caused by his/her failure to:

A director’s liability arises even if he/she did not gain from the transaction in question.

There are additional remedies available to shareholders or other entitled persons under common law, including, inter alia, damages, compensation, accounting for profits and restoration of the company property.

Duty of Directors on insolvency

A director who believes that the company is unable to pay its debts as they fall due (i.e. insolvent) is under an obligation to call a meeting of the board of directors to consider whether, the company should either apply to court for winding up (and the appointment of a liquidator or an administrator) or continue to carry on business.

In arriving at these decisions, directors must act in good faith and take into consideration the financial statements, independent valuations etc.

Where a director fails to call a meeting of the board of directors as set out above, at the time the company was insolvent, and the company is subsequently placed in liquidation, the court may on the application of a creditor or the liquidator, make an order that the director is liable for the whole or any part of the loss suffered by the creditors of the company as a result of continuing business.

Further, where a meeting of the board of directors was called, but the directors decide against applying to court for winding up whilst not having reasonable grounds for believing that the company was able to pay its debts as they fell due, and the company was subsequently placed liquidation, the court may hold those directors who voted against winding up of the company personally liable for the whole or any part of the loss suffered by the creditors of the company as a result of continuing in business.

Duty of directors on serious loss of capital

Directors are required to call an extraordinary general meeting of shareholders if the net assets of the company are less than half of its stated capital. Every director who knowingly and wilfully authorised the failure will be guilty of an offence.

Directors’ right to rely to rely on professionals and experts

It has been established that a director may be deemed negligent where he/she fails to seek appropriate expert advice. Directors are permitted to rely on professional or expert advice given by employees of the company, professional advisors or experts, and any other director or committee of directors in which the particular director did not serve. In doing so a director must act in good faith, make proper inquiry where required and should have no knowledge that such reliance is unwarranted. Directors seeking to rely on professionals and experts should maintain suitable records which may be used to establish that they acted on expert advice.


Offences and personal liability under other statutes

Directors can be personally liable and/or be prosecuted for certain offences imposed under statutes. For example, certain labour laws, Inland Revenue Act, Foreign Exchange Act, Imports and Exports (Control) Act, National Medicines Regulatory Authority Act, Consumer Affairs Authority Act, Compute Crimes Act, Prevention of Terrorism (Temporary Provisions) Act, Financial Transactions Reporting Act, and etc. provide for directors to be prosecuted for non-compliance by companies.Directors should be aware that they can be prosecuted for offences or held personally liable under these statues, even if the company is wound up and the claims against the company are extinguished.

A director may avoid liability if he/she can prove that such offences were committed without his/her consent or concurrence and that he/she had exercised all due diligence to prevent the commission of such offence.

Directors are deemed to be guilty of an offence for non-payment of EPF and ETF unless proven that the offence was committed by the company without the director’s knowledge or that the director had exercised all due diligence to prevent the commission of such offence. Directors should be mindful that the reduction of salaries without employee consent cannot be effected under Sri Lankan law, thus companies can remain liable to pay the full salaries together with the applicable EPF/ETF contributions. Failure by companies to pay the EPF/ETF contributions on the full salaries (including the amounts that should be deducted from the employees), and resulting penalties for late payment, will expose directors to prosecution for non payment of these amounts.

A director will be personally liable for the payment of tax (if they fell due) if the director alienates, charges or disposes of moneys received or accrued in respect of which tax is payable or disposes of funds belonging to the company that are in possession of the director, if the tax could legally have been paid from or out of such funds. A director may be not be personally liable if the monies were paid on behalf of the company in connection with an amount payable that has priority over the tax payable in law or equity, or if at the time the monies were paid the director had no knowledge and could not have been reasonably expected to know of such tax liability.

Winding up and personal liability of directors under various statutes

The effect of Covid-19 on Immigration - Sri Lanka