Corporate Accountability and the ‘Virtual Agm’ in the Sri Lankan Context 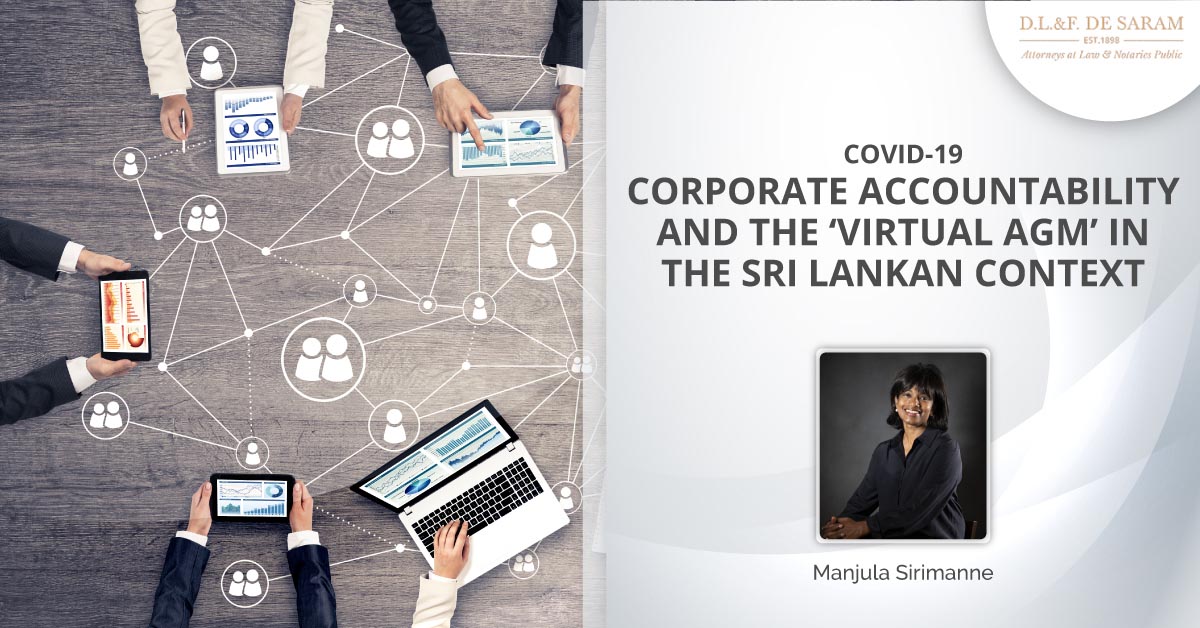 The COVID- 19 pandemic continues to evolve, demanding that the required health and safety protocols remain for a further period of an uncertain time. Sri Lanka having largely contained the pandemic and consequently revised its COVID-19 policy with a ‘return to work’ protocol within the parameters of strict measures for prevention of the disease to include sustained emphasis on ‘Social distancing’. Thus, notwithstanding a perceiving ‘business as usual’ feel in the new normal sphere, businesses continue to be challenged in one way or another, to include maintaining standards of corporate compliance.

The Companies Act No.7 of 2007 (the ‘Act’) makes mandatory the holding of an Annual General Meeting (‘AGM’) within a specified time line, with non-compliance constituting a strict liability offence on the part of the Company and its Directors.

Recognising the need to support corporate compliance and facilitate shareholder participation whilst adhering COVID-19 health and safety protocol, the Colombo Stock Exchange (‘CSE’) formulated and has issued a ‘Guidance Note’ on alternate approaches that maybe considered by companies listed on the Colombo Stock Exchange in the conducting of AGM’s amidst the restrictions in place due to the pandemic. The Guidance Note is supplemental to the Rules of the CSE and provides for: -


An Entity may choose to proceed with holding its AGM using technology to include electronic and teleconference mechanisms with no corresponding physical meeting.

Additionally, an Entity may consider the options set out in Section 144 of the Act which provides for a Resolution in lieu of holding a meeting, in writing signed by not less than 85% of the shareholders who would be entitled to vote on that resolution at a meeting of shareholders, who together hold not less than 85% of the votes entitled to be cast on that resolution, shall be as valid as if it had been passed at a meeting of those shareholders, thus, circumventing the requirement of holding the AGM.

As provided in the ‘Guidance Note’ the practical application of the suggested alternatives would however be subject at all times to the provisions of the Act to be implemented in consultation with the Office of the Registrar of Companies (ROC) vested with authority over statutory Corporate filings.

There being no precedent of hosting an AGM in electronic form by Listed Entities pre-COVID, with no enabling provision the Act nor in the Articles of Association of most Entities. The Regulator seeking to however allow consideration for the use of technology, unless otherwise expressly prohibited or prevented in terms of the Articles of Association of the Entity. This being a progressive step and in line with the Government’s general initiative to move towards a more digitalized society. COVID being the catalyst in an acceleration of the program.

The importance of an AGM inter-alia is that it affords all shareholders an opportunity for a face to face interaction with management allowing for the freedom of inquiry from the management to satisfy themselves that the management has their best interests at hand whilst holding the management accountable at all times for decisions taken.

The fact however is that global focus is on ‘health and safety’ which fact is best acknowledged by all of us sooner than later. COVID -19 IS altering our personal and work patterns to sync with restrictions of freedom of movement, strict social distancing policies, closures and limitations of work and work spaces resulting in corporates being compelled to rethink their AGM strategy.

In this background we are witnessing Regulators universally offering regulatory flexibility on how meetings are held with the option of the ‘Virtual AGM’ – namely, that which is conducted wholly electronically with no physical location including in Sri Lanka. Availing of this option a few leading Licensed Commercial Banks have successfully concluded virtual AGM’s post COVID.

Considering that AGM’ have been postponed or unable to have been convened due to the health and safety protocols currently prevailing the proposed new forms of AGM’s in the way of a hybrid or virtual meeting would be welcomed by a wide spectrum of shareholders in Sri Lanka varying, from high net worth institutional investors to rural to self- funded retirees and small retail investors, for reasons of greater accessibility with no requirement for long distances of travel and costs attached and convenience of time, particularly with the many restrictions imposed on public transport of all forms. Notwithstanding, Shareholders have expressed concern of losing the ‘in – person’ experience and consequently being apprehensive that Corporates may use the opportunity to their advantage to be less transparent and justify the use of such forms of meetings to avoid the discomfort of having to face difficult and otherwise probing questions and concerns in a ‘real’ public forum.

Virtual meetings are a first in Sri Lanka and so untested. These meetings not being always provided for in a company’s Articles and as such may be disputed as not ‘constituting a valid meeting’. The CSE acknowledging and providing for the alternatives in the form of the ‘Guidance Note’ cautions the user by qualifying itself by providing that the implementation of such form of meeting will be ‘Subject to the Act, consultation with the ROC and obtaining legal advice’. It maybe thus, implied that unless provision has or is made for use of remote meeting technology, resolutions passed at a Virtual AGM maybe affected for a lack of legal validity.

The CSE provides for the ‘hybrid AGM’ and it is opined that it may be considered to be a safer option allowing for investors to participate virtually, in conjunction with a physical meeting that meets the number of participants required for a quorum and so constituting a ‘valid AGM’.

Whilst conceding that Companies globally are facing many different challenges, it is imperative that companies in Sri Lanka move away from traditional practices and at this difficult time, work towards facilitating for investors a platform for a meaningful engagement and interaction that they would customarily expect at an AGM which is its primary purpose, regardless of the daunting restrictions on account of the Pandemic. Communication and open dialogue with shareholders arguably being needed most with hitherto unknown difficulties faced by people today. It is commendable that Sri Lanka has issue the ‘Guidance Note’ providing inter –alia for the ‘Virtual AGM’ and it is hoped that Companies along with the CSE would collaborate further to make necessary amendments to constitutional documents such as the Articles of Association to expressly permit virtual AGM’s or the Hybrid AGM, create a technical model suitable for Sri Lanka essential to a Shareholder exercising all her rights otherwise exercised with no impediment and other aspects, thereby acknowledging the function and importance of the AGM in corporate governance in Sri Lanka serving the best interests of both the Company and the Investor shareholder.

The ever increasing necessity to ‘seal deals’ electronically – is Sri Lanka ready?